Written by Mel Sole on September 8, 2015. Posted in PGA Tour

I once read that Rod Laver, legendary Australian tennis star, said that Jack Nicklaus could have been a world-class tennis star if he had not decided to pursue golf!

For example, there have been many multi-sport athletes, Deon Sanders and Bo Jackson,  who excelled at both baseball and football at the highest level.

I was fortunate to work with a gentleman named Bob Cunningham in my days of running the Canadian Golf Academy.  Bob won the Grey Cup (Canada’s version of the Super Bowl) and won a Canadian PGA Championship.  Not too many people can say that!

Bleacher Report brings us PGA Tour players who would have been stars in other sports.

The PGA Tour is full of golfers who enjoy playing other sports when they’re not preparing for the next major championship or FedEx Cup event.

Some, such as Jack Nicklaus, were happy to unwind with their athletic hobbies during their downtime. Others, such as Anthony Kim, seem to have been torn between their current profession and other sports that captured their interest from a young age.

From Dustin Johnson dunking basketballs and Sergio Garcia taking penalties, to Hale Irwin lettering in football and Rickie Fowler jumping dunes in motocross, this list features an array of PGA regulars who not only embraced other sports, but also were potentially good enough to have gone pro in them.

With that in mind, let’s dive in and posit on alternate realities where some of our golfing icons may have been heroes in other sports. 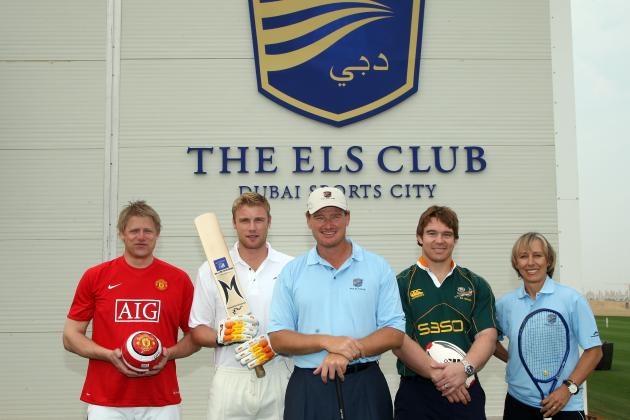 According to Ernie Els’ official website, the South African was a promising multi-sport athlete in his youth:

“As a youngster, he was outstanding in cricket, rugby and tennis. At the age of 13 he won a significant regional tennis event, the Eastern Transvaal Junior Championships.”

Relatively early on, though, Els (obviously) switched over to golf. Just one year after that tennis triumph, he won the World Junior Golf Championship in San Diego by defeating a young Phil Mickelson, among others.

Could the South African have gone pro in a sport other than golf? It’s difficult to tell, considering he was so young at the time, but his early success gives us reason to believe.

To see the other 8 PGA Tour players that could have played another sport, check out the slide show below.

Thanks for reading   9 golfers who could have been stars in other sports!

The young guns are coming!

Should Tiger look to Tennis to understand coaching!

What an incredible year for the LPGA!

10 Spectacular Golf and Tennis Vacation Resorts in the US!